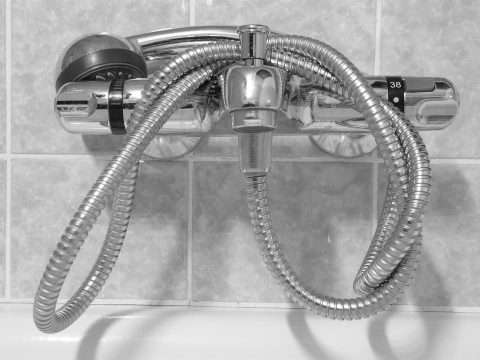 Do Legionella, Pseudomonas aeruginosa and non-tuberculous mycobacteria in household showers occur and, if yes, do they play any role in consumers’ health? We know that Legionella is a waterborne pathogen (bacterium) known to cause lung infections. The severity and impact of legionellosis can vary from mild illness (Pontiac fever) to a potentially fatal form of pneumonia (Legionnaires’ Disease).It is also well known to be transmitted through aerosols created by cooling towers, air conditioning systems, and water system outlets such as taps and showers within households and premises, and that inhalation of aerosols contaminated with Legionella can lead to infection1. Typically the perception (and therefore focus of attention) is on these instances occurring outside of the home.  What is less recognised, is the significance within household water applications, where showers2,3 have been ranked the second highest in a relative ranking of Legionella exposure pathways after ultrasonic and cool mist humidifiers4. Inhalation of water aerosols containing Legionellae, Pseudomonas aeruginosa or non-tuberculous mycobacteria during routine domestic household showering has been implicated in life-threatening respiratory infections for immunocompromised individuals5-7.

Legionella can live and thrive in water (or within an attached biofilm) of complex water systems as well as inside amoeba – their natural host8. Schoen & Ashbolt described a sequencing model showing how the Legionella that lives and multiplies within water biofilms, becomes detached from the biofilm during showering, before then being transported and aerosolized at the showerhead. Finally it shows how it is then inhaled by humans and deposited in the alveolar region of the lungs9.

The concentration and release of any created aerosols into the environment, becomes therefore critical for any showerhead user (regardless of the type of premises), especially given that opportunistic pathogens can be capable of causing serious and life-threatening infections in severely immunocompromised individuals10. A number of factors influence the size and concentration of aerosols created by a showerhead, these include; ambient humidity, type of shower install, design of the showerhead, water temperature, piping materials, the users or the bacterial communities and biofilm development11.  As far as we know, and in terms of how showerhead design works in practice, low-water consumption showerheads have been shown to generate a significantly higher number of aerosols (due to smaller internal bore size and higher pressure) compared to that of standard showerheads12.

In 2009, Feazel et al. sampled 45 showerhead surfaces from 9 cities in the US and showed that these biofilms were enriched with > 100-fold above background water content of mycobacteria, especially M. avium and M. gordonae5.

In the UK in 2017, Collins et al. investigated the occurrence of Legionella spp. in UK household showers. Out of the 99 household showers sampled in the South of England, 8 % of the shower water sampled tested positive by culture for clinically relevant Legionella spp, with a 31 % incidence of positive results obtained via qPCR (quantitative Polymerase Chain Reaction, a culture-independent diagnostics method)13. The authors clearly state, therefore, how household showers may be important reservoirs of Legionella and should be considered in source investigations13.

To summarise, controlling the water quality within an in-premise water system, by cleaning, disinfecting and/or exchanging shower hoses and shower heads regularly, whilst avoiding stagnation caused by underuse of water, are some of the measures that can be employed to help minimise the risk of pathogen-contaminated aerosol release during the showering process and the inherent risks that can result.

To discuss this further, or if you wish to learn more on this and other related topics, please do not hesitate to contact the team directly at https://www.harperwater.com/contact-us